Super Bowl Ads Reach $5 Million; Are They Worth It? – Motley Fool

At around $5 million per 30 seconds, Super Bowl ads make all other advertising look like a bargain.

An ad during the fifth season of The Walking Dead, for example, one of the most-watched shows on television, cost $400,000 — the most of any scripted show, AdAge reported. Super Bowl prices even dwarf the $1.55 million a 30-second spot cost during the 2015 Men’s NCAA Final. And it makes the $112,000 average cost for a 30-second primetime spot on a broadcast network in 2014 seem like pocket change.

This makes sense. While the Walking Dead attracts around 15 million viewers and the NCAA Men’s Final brings in somewhere between 21 and 25 million, the Super Bowl drew an all-time record 114.5 million viewers in 2015, Deadline reported. Add that to the fact that before, during, and after the big game ads get reviewed, rated, and picked apart like presidential candidates, and you can see why advertisers are willing to pony up ever-higher prices.

One could even argue that Super Bowl adds are a bargain if you look at the numbers on a pure dollar-pure-viewer value. And that doesn’t account for the added exposure Super Bowl ads get. 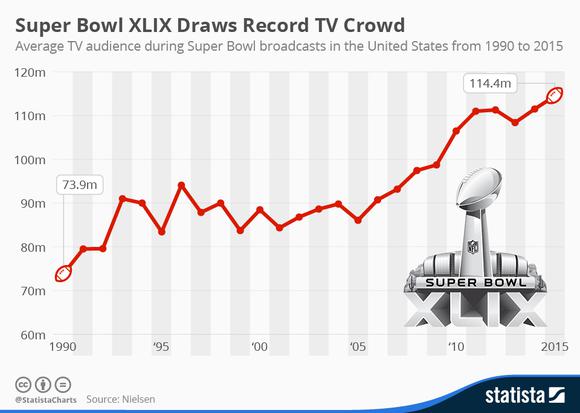 It’s in the way that you use it
For an ad to generate value it must be effective. The Super Bowl can put a commercial in front of more than 100 million people — like first-time advertiser Amazon‘s 30-second ad for its Echo wireless speaker/virtual assistant — but it can’t make them take action.

“Advertising should make people buy products, or at least build purchase interest,” wrote ad research firm Communicus in a study that examined whether the ads were worth it for brands. “Judged against this standard, most commercials failed to deliver” for each of the past two Super Bowls.

The survey, which CBS News reported on, found that only one out of five Super Bowl commercials led consumers to buy a product or build purchase interest. It also discovered that four out of five marketers believed that Super Bowl ads are not worth it. Communicus did find that some Super Bowl ads are effective. The most successful ones, according to the researcher, are ones for new or unfamiliar products.

“As advertisers like Anheuser-Busch, Mercedes-Benz, and Butterfinger have learned over the years with successful launches for new beer brands, car models, and confections, it’s very possible to build awareness and purchase interest for a new product with a single Super Bowl exposure,” Communicus wrote.

That bodes well for Amazon which will be using Dan Marino and Alec Baldwin to demonstrate a product that’s fairly unique. Echo is not a simple device to explain, but the ad, which was not released before the game, reportedly shows the stars using it to prepare for a Super Bowl party with the help of the device’s virtual assistant, Alexa. This could be very successful if executed well, and it could help turn a niche product into a mainstream hit.

But, while spending big on the Super Bowl can work, a number of experts make it clear that the odds are against it.

“Most of them don’t work,” marketing professor University of Southern California Ira Kalb wrote in the Huffington Post. “They cost a lot and produce questionable returns to those that pay for them.”

The numbers suggest maybe
A recent study backs this up, showing that advertising during the big game is a risk that can, but is not guaranteed to, pay off. The 2014 survey of 37,440 U.S. consumers by the tech firm BrandAds found that the average Super Bowl ad increased viewers’ likelihood of buying a product by 6.6%. That number increased to near 40% for the most popular spots. Conversely, only 16% of ads created negative interest in the brand advertised.

It’s about more than just the game
Amazon has kept its ad under wraps leading up to the game, but another Super Bowl 50 advertiser, T-Mobile (NASDAQ:TMUS) has tried another tactic which has proven effective in recent years. The company released one of its two 2016 Super Bowl ads early — premiering it Feb. 2 on The Today Show.

In recent years this tactic has become more popular and it sometimes works. In 2013, for example, Budweiser’s “Puppy Love” ad went live four days before the game, according to The Washington Post, which led to advance praise from Adweek and an eventual spot atop the USA Today Ad Meter as the Super Bowl’s best commercial.

T-Mobile’s only risk — and it’s a substantial one — is that its Drake-starring ad will be met with little reaction because people see it early, find it just OK, and dismiss it when the $5 million airing occurs.

It’s a big, big playing field
Even though the chance of failure is high, advertising during the Super Bowl continues to be attractive because it’s the only time all year a brand can reach over 100 million people while also receiving all the ancillary attention the big game ads get. It’s a proposition that’s simply too good to pass up, which explains why year after year the price of a 30-second spot continues to rise.

Both Amazon and T-Mobile are taking sensible shots at reaching new customers. Even if they fail, the huge amount of exposure suggests it’s not a total loss.

Super Bowl ads are both a good value and a huge risk. Whether they’re worth $5 million comes down to execution. You can get your money’s worth from the big game, but doing so requires the right products, the right ad, and a near-perfect strategy. For most companies, that’s simply too hard of a mix to pull off, but when everything hits the payout can make the expense look minor.

The next billion-dollar iSecret
The world’s biggest tech company forgot to show you something at its recent event, but a few Wall Street analysts and the Fool didn’t miss a beat: There’s a small company that’s powering their brand-new gadgets and the coming revolution in technology. And we think its stock price has nearly unlimited room to run for early in-the-know investors! To be one of them, just click here.

Daniel Kline has no position in any stocks mentioned. He wishes Peyton Manning luck and a pleasant retirement. The Motley Fool owns shares of and recommends Amazon.com. Try any of our Foolish newsletter services free for 30 days. We Fools may not all hold the same opinions, but we all believe that considering a diverse range of insights makes us better investors. The Motley Fool has a disclosure policy.

How to do a Super Bowl ad without dropping $5M – CNBC