Scarlett Johansson will appear in a commercial for the SodaStream home soda-making system.

The commercial, scheduled to run in the fourth quarter of Super Bowl XLVIII on Fox on Feb. 2, is the beginning of a multiyear, worldwide endorsement deal between Ms. Johansson and SodaStream International. The agreement, brokered by Corbis Entertainment, is to be announced Friday afternoon, followed by a private reception in Manhattan Friday night.

The commercial is being created by Humanaut, a new agency in Chattanooga, Tenn., along with Alex Bogusky, the advertising creative executive, who is serving as creative consultant; Mr. Bogusky is a minority investor in Humanaut. The two founders of Humanaut, Andrew Clark and David Littlejohn, worked with Mr. Bogusky on a SodaStream commercial that ran during Super Bowl XLVII in February 2013.

“It should have aired,” he added, because “we were just telling the truth: If you use SodaStream, you don’t need all those bottles and cans and trucks.”

This time around, the company has decided “we want to focus on the benefits of SodaStream,” Mr. Birnbaum said, rather than the environmental or other deficiencies of commercially made soft drinks, because “I don’t need to talk about Coke and Pepsi to legitimize our story.”

Still, the script of the new commercial includes what Mr. Birnbaum described as “a subtle acknowledgment of the competition of the beverage industry.” He and Mr. Bogusky say they are hopeful that Fox will approve it as written.

The goal is to “demonstrate how easy it is, how sexy it is, to make your own soda,” he added, summarizing the new pitch as “better bubbles, made by you and Scarlett.”

“It’s more of a love story between a brand with a purpose and a passionate user,” Mr. Birnbaum said, adding that Ms. Johansson has been “a SodaStream user for four or five years” who has given machines “as a gift to friends.”

Besides, he added, Ms. Johansson could one-up all the celebrities “drinking soda on the Super Bowl” in commercials from major soft-drink brands by providing what may be “the sexiest drink shot of all time.” 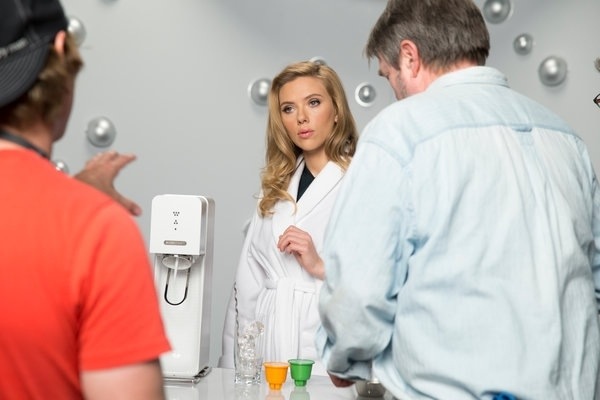