Who Won the Advertising Super Bowl? Who Scored, Who Fumbled

Keynote, a leader in Internet and mobile cloud testing and monitoring, announced the winners and losers from Sunday’s Super Bowl advertisers, measuring their Web performance across desktop, tablet and smartphone screens.

For the first time, Keynote measured Super Bowl advertisers’ websites before, during and after the Super Bowl to see how they fared in speed and reliability once the traffic started hitting. 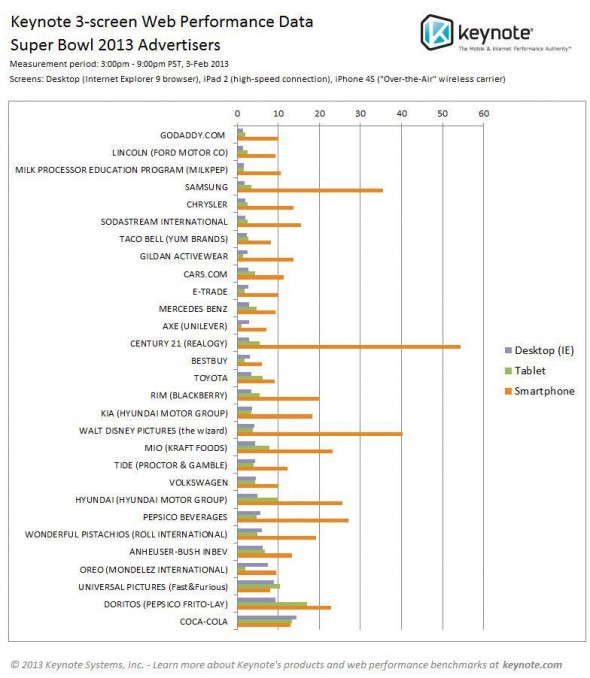 The good news: most retailers and automakers exhibited strong performance, delivering within industry best practices across the three screens. Maybe all those Black Fridays and Cyber Mondays have put them through their paces? The winners in each category were: GoDaddy (desktop); Axe (tablet); and BestBuy (Smartphone).

The bad news: some of the major consumer packaged-goods names, notably Coca-Cola with its heavily promoted “Coke Chase” campaign, showed unacceptably slow response times on mobile devices and even desktops. From 5:00pm to 9:00pm PST, the Coca-Cola site crashed repeatedly for consumers trying to access it on mobile devices and laptops. During that time period Keynote measurements showed that the Coca-Cola smartphone site was completely unavailable, and more than 70% of visitors to the desktop site were turned away. For those that did reach the site, it took almost 15 seconds to respond, making it the worst performer in that category. 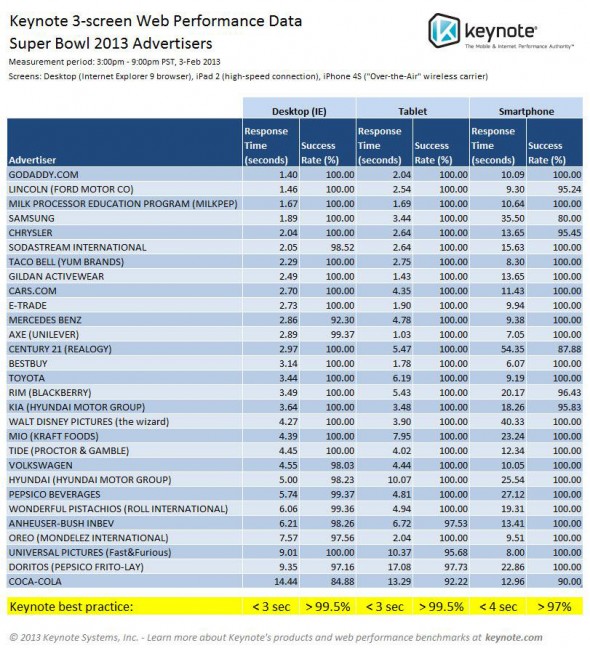 “Given the money spent and the high-profile brands promoted, we were surprised to see how poor some of these numbers are,” comments Nick Halsey, chief marketing officer at Keynote. “Clearly the next challenge for these multi-channel campaigns is to better prepare for the three-screen delivery model; testing, monitoring and load testing end user experience prior to special events and to assure day-to-day performance are mission-critical. It’s not enough to simply hope the desktop site will run on a mobile device, particularly when some of the content is rich video and animation.”