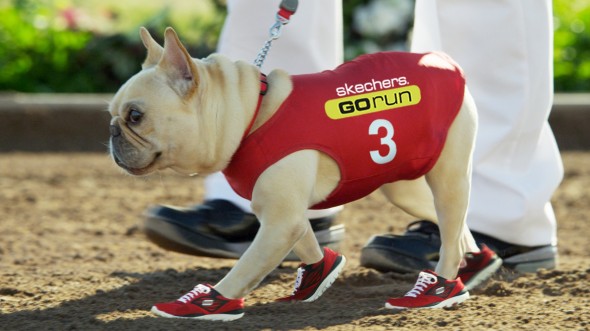 Mr. Quiggly, the adorable French Bulldog, will return to the Super Bowl in SKECHERS’ 2013 ad campaign.

SKECHERS USA, Inc. (SKX), a global leader in the footwear industry, today announced that it has purchased advertising to air on CBS during the 2013 Super Bowl. The Company is in the planning stages of next year’s campaign, but did indicate it plans to promote Skechers Performance footwear and utilize the talents of Mr. Quiggly—the adorable French Bulldog who won hearts around the globe when he raced wearing doggy-sized Skechers GOrun shoes in the Company’s 2012 commercial.

“2012 was our third year at the Big Game and thanks to Mr. Quiggly, we ranked third in the viewer polls. The spot generated massive awareness for our Skechers GOrun product,” began Michael Greenberg, president of SKECHERS. “Next year we’ll be celebrating our second anniversary as a performance brand and we already have Mr. Quiggly booked and back in training for his triumphant return. We’re aiming for the No. 1 Super Bowl commercial this time.”

Skechers GOrun exploded into the serious running scene in November 2011 when elite marathoner Meb Keflezighi wore the shoes to set a new personal record as the first American to cross the finish line in the 2012 NYC Marathon. Since then, the running community has followed Meb’s story and embraced Skechers GOrun with Competitor and Women’s Running naming it the “Most Innovative” new running line for 2012. Meb will be once again wearing Skechers GOrun footwear when he represents the United States on the world’s biggest stage in London this summer.

SKECHERS is building on this foundation of success in minimal running by expanding its Skechers Performance Division with launches this summer of Skechers GOrun Ride – a running line with enhanced cushioning, Skechers GOtrain – a workout shoe built for added stability and control, and Skechers GObionic, a zero-drop ultra-minimal running shoe. From the track to the gym, with additional categories planned for the trail and golf course, Skechers Performance will leverage technologies and innovations developed for Skechers GOrun to offer a variety of Skechers GO lines that meet the needs of athletes at every level and ability across multiple sports and activities.