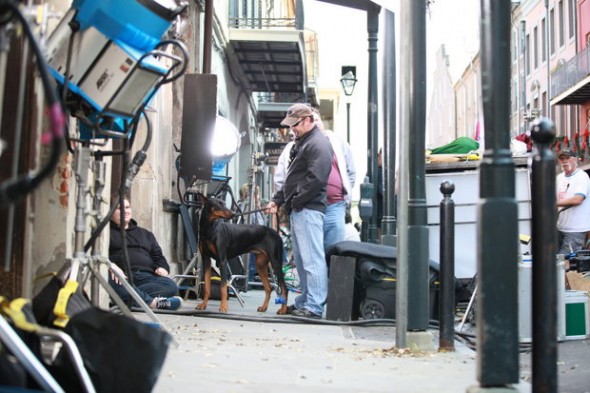 For at least one brand, the road to the Super Bowl advertising derby comes through and leads to New Orleans. This week in the French Quarter, Mercedes-Benz is shooting a 60-second Super Bowl commercial to air during the game’s fourth quarter.

The spot, which will introduce the new CLA sedan, features pop star Usher, Sports Illustrated swimsuit model Kate Upton and another famous face to be revealed during the commercial, which may or may not be released online before the game. A substantial social media campaign and “teaser” spots will serve as prelude to the commercial, the tone of which will be foreshadowed on a billboard to be unveiled this weekend near the Mercedes-Benz Superdome. The outdoor ad’s copy: “One temptation no Saint can resist. Introducing the CLA. Coming in 2013.”

At a Thursday (Nov. 29) shoot for the commercial, directed by Dante Ariola and produced by the New York City-based Merkley+Partners ad agency, atmospheric scenes were captured of a barking Doberman named Cletus and a table-full of children considering a huge ice-cream sundae. Other details are closely held secrets for now, but the theme of the ad is “a tongue-in-cheek depiction of how far a person might — or might not — go to get their heart’s desire,” according to published reports. Segments of the commercial have already been filmed in Los Angeles.

The decision to shoot and set part of the spot here was made by Steve Cannon, Mercedes-Benz USA CEO. In addition to the Superdome naming-rights agreement, which reduces Louisiana’s financial obligations to the New Orleans Saints, Mercedes has executed several initiatives that benefit the city, including a post-Katrina donation of $250,000, a 2010 tree-planting program for City Park and a $1.3 million donation to Laureus USA, which supports after-school sports programs in several cities, including New Orleans.