For the second year in a row, Hyundai is dialing up the entertainment value of the Super Bowl by producing a unique TV commercial which targets Canadian viewers.

“We are thrilled to be one of the few Canadian companies committed to creating a unique commercial for the 2013 Super Bowl. There is no bigger stage than the Super Bowl to make a statement about one of our products and its advanced technology,” said John Vernile, HACC’s Vice President of Marketing. “We decided to invest in this commercial to entertain our viewers but at the same time, to inform them that we have a world-class hybrid sedan.”

Taking a different tack this year, Hyundai will not keep Super Bowl lovers waiting until game day but is posting the commercial online today. And to maximize entertainment value and help stoke conversations around office water coolers and chat rooms, two versions with different endings will be released for the benefit of the online community. Canadians can now view the two different cuts online at www.YouTube.com/HyundaiCanada or www.Facebook.com/HyundaiCanada in advance of this Sunday’s broadcast. 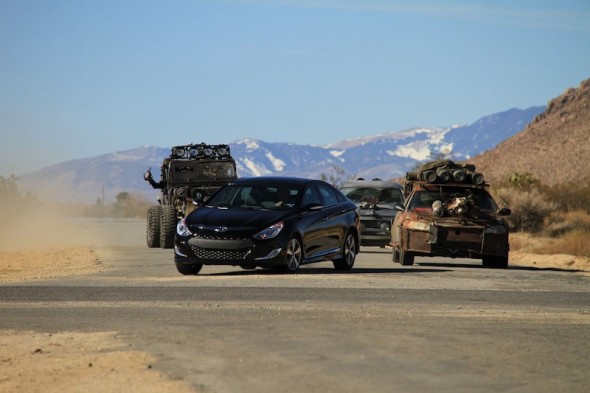 The commercial is expected to air during the highly-anticipated Half Time Show. “The Super Bowl has evolved to become an all-round entertaining event for the viewers. But the Half Time Show historically gathers the whole family in front of the television, so it only made sense to air our commercial when the most viewers are expected to tune-in,” said Vernile. “I have no doubt that Canadians will appreciate that Hyundai took the extra step to ‘up’ the entertainment factor of the Super Bowl broadcast in this country with our own, unique ad.”

With more than 100 million viewers expected to watch the Super Bowl in North America and more than 14 million in Canada alone, the ad speaks to the sophisticated urbanite that is conscious of style, quality, and price, while motivated by value-packed, fuel efficient vehicles.