3 Social Lessons for Brands From the Super Bowl Blackout

The Big Game has come and gone. While most people are talking about their favorite – or in some cases – least favorite Super Bowl ads, the real showstopper wasn’t the commercials or even Beyoncé reuniting with Destiny’s Child. No, the real event took place during the 32 minutes that the stadium went dark.

At the house party where I was, everyone put down their iPads and smartphones and looked at each other with dismay and confusion as if to ask each other “is this really happening?” And of course, the joking tweets were sent out from the thousands almost immediately.

What happened next is what separates the brands who came to play from those that are still trying to figure out what just happened.

Audi sent out a tweet to “send some LEDs to the @MBUSA Superdome right now.”

Tide tweeted a clever photo with the caption “We can’t get your #blackout, but we can get your stains out.”

Calvin Klein linked followers to a Vine video featuring their svelte commercial star working out his abs because “the lights were still out.”

Even Walgreens jumped into the mix letting fans know that they “carry candles” with the hashtag #SuperBowl.

But the best came from a cookie. Always known for clever and smart community management, Oreo quickly added a Facebook post with the short status “Power out? No problem.” As of Monday morning, the post had over 6,700 shares and over 20,000 likes with 785 comments. 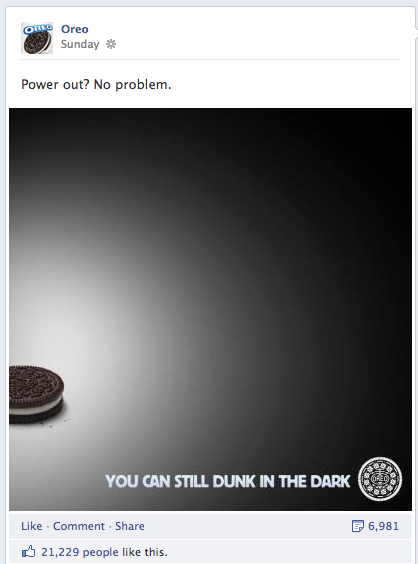 How Did Users React?

Fans tweeted, liked, shared and praised the “social media” people behind each channel, suggesting they receive raises and applauding creativity and timeliness of each of the brands’ posts.

What really made this work though is the obvious trust between the brands and their agencies.

Prepare for the Unexpected: Have a triage system created between all internal and external partners needed from the public relations to social marketing to executives to anticipate crises, but also events like this where our audience is watching along.

Is it appropriate? As marketers, we have seen where it is and isn’t appropriate to interject a brand into the existing conversation, whether it is on accident like some of the social media blunders we’ve seen. Some events are more appropriate than others for a brand to share.

Stay nimble: While we can plan until our heart’s content with editorial calendars and legal approvals, savvy brands recognize the need to work on the fly and stray away from the planned content as needed.

The Verge: How Oreo’s rapid-response team lit up Twitter with a Super Bowl blackout ad

Wired: How Oreo Won the Marketing Super Bowl With a Timely Blackout Ad on Twitter