Which Super Bowl Ads Get Shared the Most? [INFOGRAPHIC]

Believe it or not, the Super Bowl is only two weeks from this coming Sunday. That means that over the next fortnight we can expect a barrage of PR from advertisers in the big game looking to maximize their $3.5 million-per-30-second-ad spend by creating some online buzz.

As this infographic from Sharethrough, an online video distribution firm, demonstrates though, when it comes to Super Bowl ads, content is king. Sharethrough looked at 2011’s lineup of Super Bowl ads and identified which commercials got the most views and engagements. 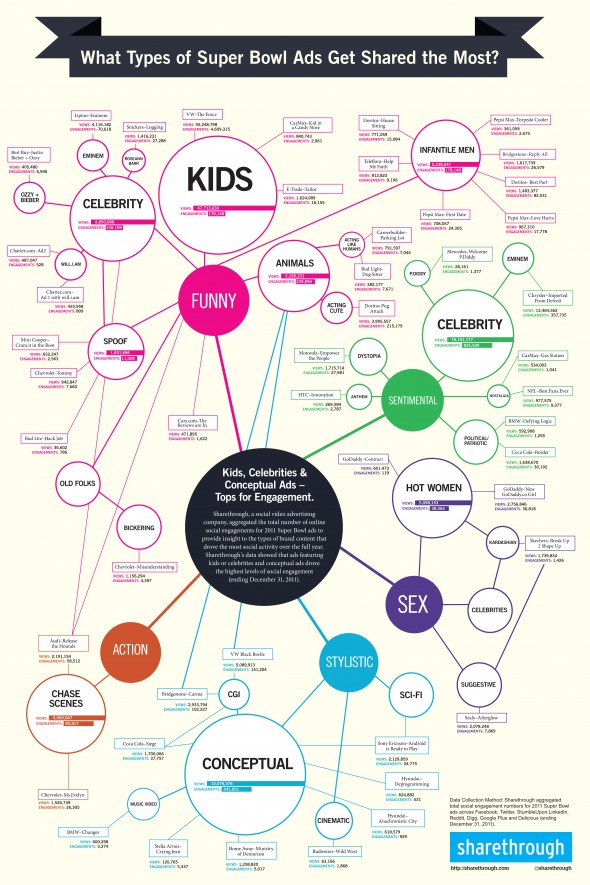 The company’s findings reveal a built-in conundrum with Super Bowl ads: Advertisers tend be intimidated by that high price tag. With so much money on the line, they often fall back on common themes. Many of those — hot women, infantile men, animals — are highlighted here. One thing that’s clear from this chart: Going conceptual is a good idea. Viewers want to see some new thinking, rather than lingering shots of Kim Kardashian. After all, there are already plenty of those on the Internet.