You could say Carmel-based artist, Walter Knabe is in on the Super Bowl. Wednesday the Super Bowl Host Committee unveiled the commemorative poster Knabe did for them.

The artwork includes images of Lucas Oil Stadium, an NFL football and Lady Victory from atop the Soldiers and Sailors Monument, all surrounded by stars, confetti and fireworks.

“The concept was to create the celebration around the event and the citym and what was the perfect celebratory piece? Of course, the monument,” said Knabe.

Knabe was chosen to do design the poster over several other Indiana artists. He is internationally known for his fine art, fabrics and wall coverings with Michael Jordan, Richard Gere and Madonna (who’s performing at half-time) on his list of famous clients.

In recent years, he’s also become known for his commemorative posters. In 2010, he did one for the Indy 500.

“It’s an interesting niche that’s fallen into my lap,” he said. “It’s generally not the art I do, but it’s a blast.”

He used the same process he uses in other works – a combination of hand painting, hand silk-screening and digital work.

Asked if he was a big football fan, Knabe laughed, “I was afraid you’d ask me that. I am a fan of football, but not a big one, but the event has piqued my interest because it’s in Indianapolis and such an international event.”

He said he’s glad that art has a role in the Super Bowl festivities, saying the two share more in common than people may think.

“The process of competition in sports itself, how they work out and prepare is not dissimilar to doing art and constantly working on what you’re doing and the process,” he said.

Knabe’s posters are not for sale. They’re being given to members of the host committee, donors and some of the volunteers. Knabe hopes they feel the same pride in the city that he does when they see the poster.

“I was mindful of the work people have been doing, those who will receive [the posters] and the appreciation for them having putting in the all that time and effort,” he said. “It’s more than I’m able to do. It’s a cool thing.” 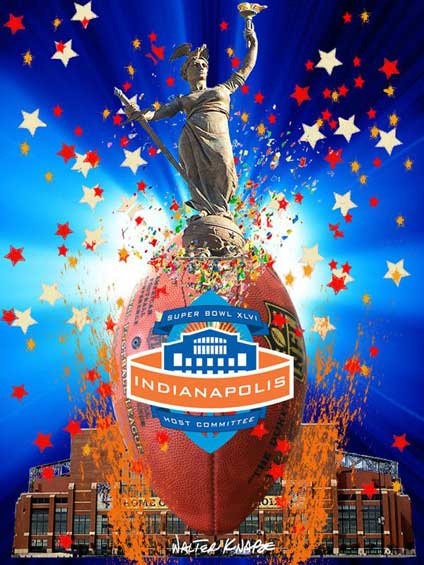