Kim Kardashian isn’t being thrown a bone from Skechers on Super Bowl Sunday — but a dog is.

Kardashian, the reality TV mega-star who was featured in the sneaker maker’s racy Super Bowl commercial last year, has been dropped and will be replaced by a scrappy French bulldog named Mr. Quiggly.

Mark Cuban, the owner of the Dallas Mavericks, also has a cameo in the upcoming Skechers GOrun commercial premiering during SUPER BOWL XLVI. 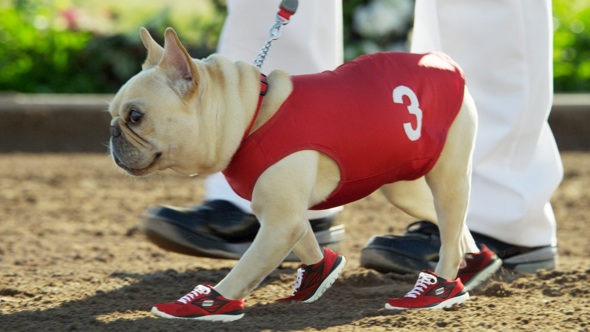 Mr. Quiggly steps into the spotlight as the representative of SKECHERS’ underdog image in the performance arena. The new campaign will use humor to illustrate how SKECHERS now produces performance footwear that’s exceeding expectations and impressing runners and athletes everywhere.

Skechers will run its spot in the coveted position right before the two minute warning in the first half of the game.In the spot, the tiny dog — bedecked in Skechers’ new GOrun shoes — races a pack of greyhounds.

The spot does not glamorize dog racing, he says. “It is simply a metaphor for a remarkable, underdog achievement.”

Cuban, who appears briefly in the ad, knows that he and the ad’s dog star have a tough act to follow. “I’m not Kim Kardashian,” he says. “But one of the things I do know is high technology and how to use it. ”