Pepsi's Return to the Super Bowl is Fit for a King

The new ad titled “King’s Court” features Melanie Amaro, THE X FACTOR 2011 winner, singing for multi Grammy-winning music legend Sir Elton John who plays a “king of rock” in the commercial. The ad was produced by TBWA/Chiat Day and directed by Noam Murro. During the commercial, Amaro performs a song she recorded exclusively for the ad, a contemporized version of RESPECT, by Otis Redding, and made popular by the “Queen of Soul” Aretha Franklin. Pepsi fans who “Shazam” the spot during the big game will be able to view Amaro’s music video for RESPECT. 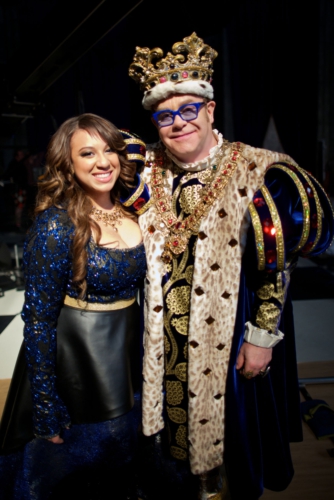 Set in a rock-fantasy version of medieval times, the 60 second commercial features Melanie Amaro performing in front of a “royal court of rock,” including Elton John’s character, the King. The ad establishes Pepsi as the brand for people who are not afraid to take a chance, raise their voice and give it their all. It also highlights the fact that Pepsi has an irresistible taste worth challenging a king for. With epic Pepsi scale and a big dose of humor, the commercial ends with a twist and the tagline, “Where there’s Pepsi, There’s Music”.

“Pepsi wanted to make me ‘King for a Day’ on Super Bowl Sunday. How could I possibly pass that up?” said Sir Elton John.

In addition to the Shazam offering during the big game, Pepsi will enhance the fan Super Bowl experience through integrated digital programming. Highlights include: an NFL-themed version of Pepsi Sound Off, the first brand-led social TV platform, which was launched during THE X FACTOR to engage consumers in a real time viewing party with celebrity hosts. Digital programming also extends to a partnership with Pandora providing fans with a Pepsi-curated Super Bowl-themed station to listen to before, during and after the game. Lastly, a partnership with social network, Get Glue, which allows users to check-in and unlock exclusive content and free Pepsi.

Pepsi and Pepsi MAX will provide fans with engaging Super Bowl XLVI activities from January 27- February 5 in Indianapolis, including:

Pepsi is also the official sponsor of the Fan Jam Concert Series and Tazon Latino VI.