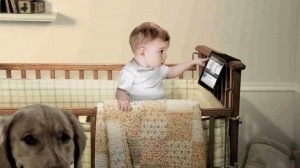 E-Trade Financial Corp. will advertise in the Super Bowl again early next year. The spot will certainly feature a talking baby. The idea for its commercial, however, may not be one cooked up by E-Trade ad agency Grey Group.

The storyline for the spot could come from a pool of videographers who submitted 250 submissions for E-Trade and Grey through Poptent, a social network dedicated to crowdsourcing video content. Grey will produce any of the work chosen from the pool, says E-Trade Chief Marketing Officer Nick Utton.

Utton, who stresses he is “delighted” with Grey, tells me he decided to crowdsource ideas for E-Trade’s 2011 advertising campaign to make sure the financial services company has the “best advertising imaginable” going in to the new year. “If we can get some ideas from people as creative fodder, it would be helpful.”

Utton will evaluate ad ideas from Grey, a unit of WPP Group, along with those submitted by Poptent’s talent pool. Utton didn’t want to share any details from the crowdsourcing effort but I understand that one submitted features emus—animals in ads are sure-fire Super Bowl crowd pleasers. Another features Benny baby trying to get another to invest in a “Twitter for dogs.” ETrade will pay $15,000 to the best winning video. It will pay $10,000 each for two runner-up videos.

“We’re busy reviewing what we’ve got,” Utton says. “We’ve got a lot of great options.”

Poptent, based in Wynnewood, Pa., works with many big marketers, including Procter & Gamble, Anheuser-Busch and GE, which just paid $40,000 for four videos produced by the Poptent community. Typically, says Poptent president Neil Perry, marketers buy broadcast-ready spots for TV spots and Web videos. The company charges $35,000 for most assignments. They keep $25,000 and the remainder goes to creators of the best content.

The privately held company recently received $3 million from MK Capital.
Frito-Lay has used consumer-generated commercials during the Super Bowl for several years. This year it will run such ads for Pepsi Max and Doritos.
Utton wanted to keep submissions contained to a smaller group, citing the competitive market E-Trade is in. “Doritos, let’s be honest, is a snack food. Money is serious stuff. We use humor and yet…we are highly regulated.”
Grey is partnering with E-Trade in this effort. Utton says Grey is a great “generalist” ad shop. “Does Grey have the best mobile platform development for the Droid, RIM and Apple? No. That’s when E-Trade and others go out and buy specialist help.”