Super Bowl Ads Aren't What They Used To Be 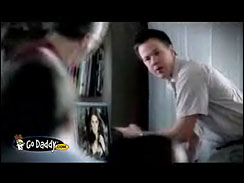 Godaddy.com’s commercial was rejected by Fox, but the ad they will run shows you where you can see the ad online that can’t be shown on TV. Are either of them worth watching?

(CBS)  Super Bowl commercials are supposed to be the best. The very best!

Every year, we expect miracles — and every year, to be honest, many of them disappoint. This year is no different, though the culprit might surprise you – that vast new advertising frontier we call “the Internet.” Yes, the great equalizer has leveled the playing field; now bad is the new good.

Let’s start with a Web mainstay, the requisite cleavage shot.

Back in 1999, Victoria’s Secret was the first sponsor to use its TV ad time to send viewers to a naughty fashion show at a special Web address. Needless to say, computers crashed the world over.

This year, Victoria’s Secret is back and all of the advertisers have gone interactive.

So have the viewers.

Everyone’s a critic, we not only watch the spots, we get to rate them in cyberspace.

Now with so much more riding on their commercials, wouldn’t advertisers want creative genius?

Not so much. Take GoDaddy.com. Its spots first showed up three years ago with an ad that was supposed to mock Janet Jackson’s infamous wardrobe malfunction.

It’s not easy to create something corny and porny. But you can’t argue with the numbers: the company has doubled its market share. This year, GoDaddy has already earned millions in free publicity for its latest stunt, a spot FOX has refused to run.

What will they air instead? An ad that shows you where you can see the one that was banned.

But there’s worse. In fact, what may be the worst commercial ever. Last year’s ad for Salesgenie.com. It was so deadpan bad, it seemed like a spoof. It wasn’t.

The founder of the company wrote it himself and proudly does the honors again this year. He says he got a big enough response to go for broke again.

So he’s spent millions in the hopes of making this year’s spot even worse than last year’s.

It won’t be easy.

If the Internet is advertising’s bright future, it’s looking more like television’s dim-witted past.