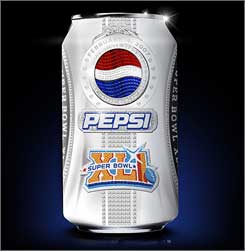 Pepsi will award a $100,000 sterling silver can trimmed with 300 diamonds, 100 sapphires and 100 rubies — but empty — to the winner of its Super Bowl halftime show promotion.

In order to put some pop into its sponsorship of the Super Bowl XLI halftime show, Pepsi will give away a $100,000 jewel-studded soft-drink can to a lucky fan.

The sweepstakes winner also will get two Super Bowl tickets every year for life.

“The can is all blinged out,” Pepsi-Cola (PEP) North America Chief Marketing Officer Cie Nicholson says of the sterling-silver can crusted with 300 diamonds, 100 sapphires and 100 rubies. The design was inspired by past Super Bowl rings, as well as by the Vince Lombardi Trophy for the winning Super Bowl team.

Registration at SuperBowl.com/pepsi begins Saturday, as will TV, radio and Internet ads for the sweepstakes. After people sign up at the site to enter, they will be e-mailed a code number. The winning code will be revealed at the end of the halftime show of the Feb. 4 game on CBS.

While a lifetime of Super Bowl tickets has obvious value, what the winner can do with the ornate can is less clear. “I think they’ll build an addition on their house to display it,” jokes Nicholson.

There’s not even any Pepsi in the can, but “I think they will be OK with that,” Nicholson says.

The winner may be less OK with learning that he or she may owe income tax on the bejeweled prize.

This year’s game will be Pepsi’s 21st as a Super Bowl advertiser, but it will be the first time the soft-drink giant has sponsored the halftime show. It sees the sweepstakes as one more way to get TV viewers to stay in their seats at the half. It also hopes to draw folks in the next few weeks to its website, where it can promote other NFL tie-ins such as fan voting for the “Diet Pepsi Rookie of the Year.”

But perhaps one of the promotion’s most valuable benefits for Pepsi is that it will secure the e-mail addresses of current and potential customers who enter.

“The ability to run a promotion where you can get names and e-mail addresses is a very powerful way for a company to strategically get closer to their customers,” says Pamela Danziger, president of the consulting firm Unity Marketing. The opportunity for such one-on-one marketing is the “name of the game today.”

Nicholson says, however, that it will be up to consumers to decide whether to “opt in” for their address to go onto Pepsi’s e-mail list for communications about products and events.

Creating such an over-the-top luxury item as the jeweled can is a way to get a promotion a boatload of buzz, says Deirdre McMennamin, partner at G2 Branding & Design.

Among recent examples of marketers putting on the jewels to make a splash:

• Philips Electronics (PHG) unveiled a diamond-decorated LCD TV on Sunday at the Consumer Electronics Show in Las Vegas. The Ambilight FlatTV trimmed with about 2,250 diamonds will be showcased at Philips events, then auctioned for charity.

• Victoria’s Secret (LTD) annually creates for sale a jeweled bra — this year, a $6.5 million diamond-studded Victoria’s Secret Hearts on Fire model. The lingerie company hasn’t actually sold any of the multimillion-dollar bras, but gets plenty of publicity by featuring them in its holiday catalog and at fashion shows.

“Its not that companies necessarily expect many people to buy these products,” says McMennamin. “It’s similar to having a flagship store on Fifth Avenue or SoHo, where they don’t expect the cash register to ring as much as a regular store” but use it to build cachet, instead.

• When Motorola (MOT) and Baby Phat said they would sell a limited-edition $700 diamond-accented “Baby Phat by Kimora Lee Simmons” cellphone in October 2004, it brought headlines about “ring bling.”

• Montblanc’s bejeweled, special-edition pens, which it also sells, have gotten features in luxury magazines.
“These kinds of extreme, ultra, ultra, ultra high-end products draw attention,” Danziger says. “So why not use them to build buzz?”