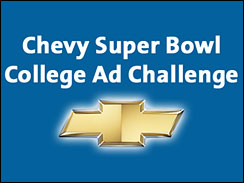 Chevy says more than 800 teams from some 200 schools applied.

The winning ad, created by a student team and produced by Chevrolet, will air during Super Bowl XLI this Sunday, on CBS. The Early Show will interview the winning team live on Monday, Feb. 5.

On Wednesdays this month, The Early Show showed video mock-ups of some of the ads that came in from students around the nation, and you got to pick the ones you liked best.

We organized them into four categories: “Best Use of Car,” “Most Humorous,” “Best Football-Themed,” and “Most Offbeat.”

You can also see behind-the-scenes footage of the five teams selected by Chevy as finalists, as they finessed and then presented their ideas to compete for the top spot. Log on to cbs.com/chevy to see those reality webisodes.

Ad critic Barbara Lippert of Adweek magazine was on hand to critique three mock-ups showing the most offbeat themes to advertise Chevy vehicles.

In classic comic book style, this student team from the Art Institute of California, San Diego portrays Chevy’s new cars and crossovers as superheroes rescuing a little girl’s cat from a tree.

Team 218: “To the Moon and Back,” by Luke Wolf, Jason Wilcynski, and Melissa Klang, of the University of Wisconsin, Platteville.

Set to the soundtrack of Savage Garden’s hit “To the Moon and Back,” this student team from the University of Wisconsin, Platteville shows people driving Chevy’s new cars and crossovers driving to a Super Bowl party — on the moon!

Team 787: “Crossing Over,” by Laura Kessler and Irene Jeanotte of Savannah College of Art & Design

This quirky ad concept created by a student team from Savannah College of Art & Design gives new meaning to the phrase “Crossing Over.”

Team 218 wound up as the Week 4 viewers’ favorite, based on online voting.