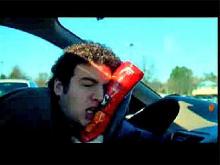 Cary, N.C. — The Super Bowl is the biggest event of the year for television advertisers. Now, a locally produced commercial might be one of the spots aired on CBS the night of Feb. 4.With roller blades, a car and a camera, Wes Phillips and his buddy Dale Backus produced the spot in the parking lot of Cary’s Waverly Place. They asked Backus’ wife Cori and their friend Nick Dimondi to star in the 30-second commercial. They had just four days to complete the project.

The winner of the Doritos Crash the Super Bowl contest will see their 30-second spot air during the Super Bowl. The five finalists will receive $10,000 apiece.

“It ended up being a 30-second romantic comedy,” Phillips said. “Girls like it for that reason. Guys like it because a girl hits her head on the car at the end.