With Super Bowl XL in its Detroit hometown, ailing General Motors has shifted into high gear to capitalize on the game.

As the official auto sponsor of the National Football League, GM’s marketing blitz includes big-budget TV ads and stunts, such as encasing its headquarters in a Super Bowl-themed vinyl wrapping. Much of the marketing will hype the revamped 2007 Escalade SUV by Cadillac.

“This is a unique opportunity because the game is in Detroit,” says Cadillac general manager Jim Taylor. “We’ll be on a world stage … in front of our employees and neighbors.”

GM desperately needs to rev up purchases of its vehicles: Overall sales for 2005 were down 4.4% vs. 2004, according to Autodata. The drop comes as foreign carmakers drive off with GM’s customers. 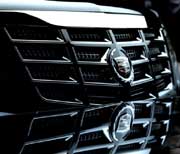 Cadillac will debut new ads during the Super Bowl.

Taylor says that while GM faces “financial challenges,” he’s optimistic about the impact of the big game — and GM’s unveiling of the sleek-looking luxury SUV. The Escalade — often seen as a hot vehicle for bling-loving celebrities — is positioned as a more sophisticated offering in the Super Bowl ad, which shows it at a high-end fashion show. Even though the new SUV follows stylish-looking, metallic-clothed models onto the catwalk, GM and its ad agency are quick to defend the Escalade’s masculinity. “It’s not a soft, pretty fashion show,” says Tor Myhren, a creative director at ad firm Leo Burnett. “It’s a hard-edge fashion show.” The 2007 Escalade enters the market as SUVs in general have felt the pressure of rising gas prices. Last year, sales of the standard Escalade slid 19.2%. Taylor says part of that drop came from potential shoppers waiting to buy the 2007 vehicle, which has a new body. “With or without (the increase) in gas prices, we expected a softening in our Escalade volume,” he says. Auto analysts say the 2007 Escalade could help steer GM back on track.

“Launching new vehicles that are desired by the consumer can help revive a company,” says J.D. Power Global forecasting director Jeff Schuster. Based on the style improvements, the revamped Escalade “should do well in the marketplace,” he says.

As GM leverages its official game sponsorship, which also includes on-field time for the car, rivals DaimlerChrysler and Ford refuse to sit on the sidelines.

With 100,000 visitors expected in the Motor City, DaimlerChrysler will get some marketing mileage by sponsoring local events tied to the city’s Super Bowl-related Motown Winter Blast festival. Ford, which has a national ad running on ABC’s Super Bowl broadcast, will host booths at the Winter Blast and supply a fleet of Model T’s to cart visitors around.

And Ford has an inherent advantage: The Super Sunday matchup takes place at Ford Field. “I can’t think of a better place for the game to be played,” Ford spokeswoman Marcey Evans says.