NEW YORK — TV is just one way viewers can have Burger King’s first Super Bowl ad in a decade. 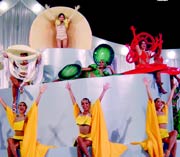 The Whopperettes will star in a Burger King ad during the Super Bowl.

Shortly after Burger King’s 60-second ad airs before an expected 90 million Super Bowl viewers on Feb. 5, it will go out over one of the newest ad media. Millions of Sprint wireless phone subscribers with video service will have the chance to watch a longer version that includes outtakes and behind-the-scenes footage.

The ad is an over-the-top production in the spirit of MGM’s 1930s musicals: 92 “Whopperettes” dressed as burgers, flames, pickles, lettuce and tomatoes will sing and dance to new lyrics for the famous “Have it Your Way” jingle. 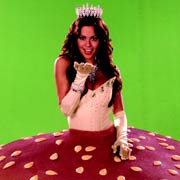 The ad ad will kick off a campaign of Whopper-focused advertising.

The Sprint deal is one way Burger King will try to extend the reach and shelf life of its Super Bowl ad investment — about $1 million to produce the ad and about $5 million for the minute during the game.

The ad will kick off a campaign of Whopper-focused advertising (including two more Whopperette TV ads) to general and targeted audiences.

Also rolling out for Super Sunday will be a link on burgerking.com to a special interactive Whopperettes area. The ad will be downloadable to iPods and within days will be shown in movie theaters. Whopperette posters also will go up in Burger King’s 7,600 U.S. restaurants.

“Instead of having the ad stand alone, they are surrounding it with other platforms where people are migrating,” says Andy Donchin, director of national broadcast for media buying company Carat. “You want to get the biggest bang for your buck by putting the commercial in other venues.”

But the whole multimedia effort still kicks off with the big bang of a big-event TV ad.

“As much as people want to write the TV network obituaries, alternative media becomes a way of extending what is still the No. 1 form of viewership in the world,” says Russ Klein, Burger King’s top marketer.

The blending of old and new media and promotion — from TV ads to restaurant tray liners — into an integrated campaign with every detail reinforcing the message is the signature of BK’s ad agency, the hot Crispin Porter & Bogusky.

Phone screen video is a new ad frontier but is already a $45 million annual business.

How it will work for Sprint video subscribers: Within 30 minutes of the ad airing, those who’ve opted to receive text messages from Sprint will get a note saying the extended ad is available on a dedicated Sprint TV channel on their handset. Sprint has 45 million subscribers but would not say how many buy video services.

“If they want to see this commercial, they can get it,” says Sprint spokeswoman Angela Read. “People are looking online for commercials. This is another way to do it.”

The phone version will be limited to about two minutes. “We’re going to be respectful of how much it burns up on run time,” Klein says.

“The Sprint partnership is one key ingredient to this overall megaplatform to deliver the Whopperettes message.”