Alpacas, a genie, a farmer and babies flying in from space were just a few of the characters auto manufacturers used to try and grab consumer’s attention during Super Bowl® XLVII. And judging by the activity on AutoTrader.com, the Internet’s ultimate automotive marketplace, they resonated with car shoppers.

“Hyundai really benefitted from their sponsorship and ad buys during the pre-game,” said Rick Wainschel , AutoTrader.com’s vice president of automotive insights. “While this percentage lift is attributed to the ‘Team’ spot, there’s no question that the ‘Epic Playdate’ spot and their pre-game branding elements also helped catch shopper’s attention.” 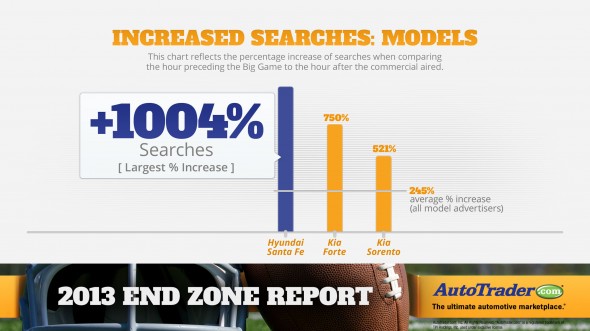 “While it does take a significant amount of traffic to show measurable lift at the model level, it’s even harder to do at the make level, particularly for high-volume brands like RAM,” said Wainschel. “While Lincoln’s tactic of leveraging social media to guide content definitely worked in their favor, I think all four of these spots were highly effective.”

To reach these conclusions, AutoTrader.com analysts looked for percentage lifts by comparing search activity at the make and model level in the hour immediately after the ad ran and compared it to activity the hour before the game (5-6PM EST). This timeframe was determined to be the most statistically appropriate baseline after an extensive analysis of site traffic patterns over several years. With more than 16 million consumers visiting the site every month, AutoTrader.com is an ideal bellwether of automotive shopping behavior. 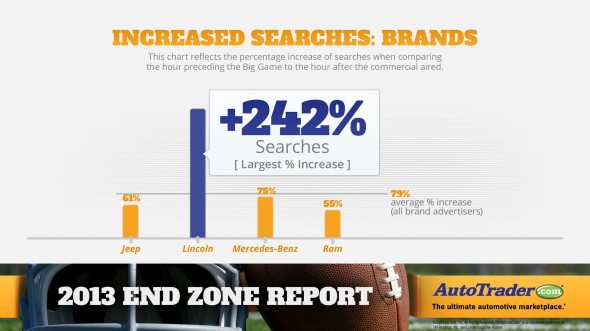 The story doesn’t end with the conclusion of the game – AutoTrader.com analysts will continue to monitor how the ads impact shopper interest in the days and weeks ahead to identify which spots were most effective in holding consumer’s attention. Analysts will also be gathering attitudinal insights from on-site surveys and the site’s big game social landing page, where consumers can watch all of the automotive commercials, comment and vote on their favorites. The voting module is already starting to give a sense of the ads that were fan favorites, with the Audi “Prom,” Toyota “Wish Granted” and Kia “Space Babies” getting “thumbs up” from shoppers.